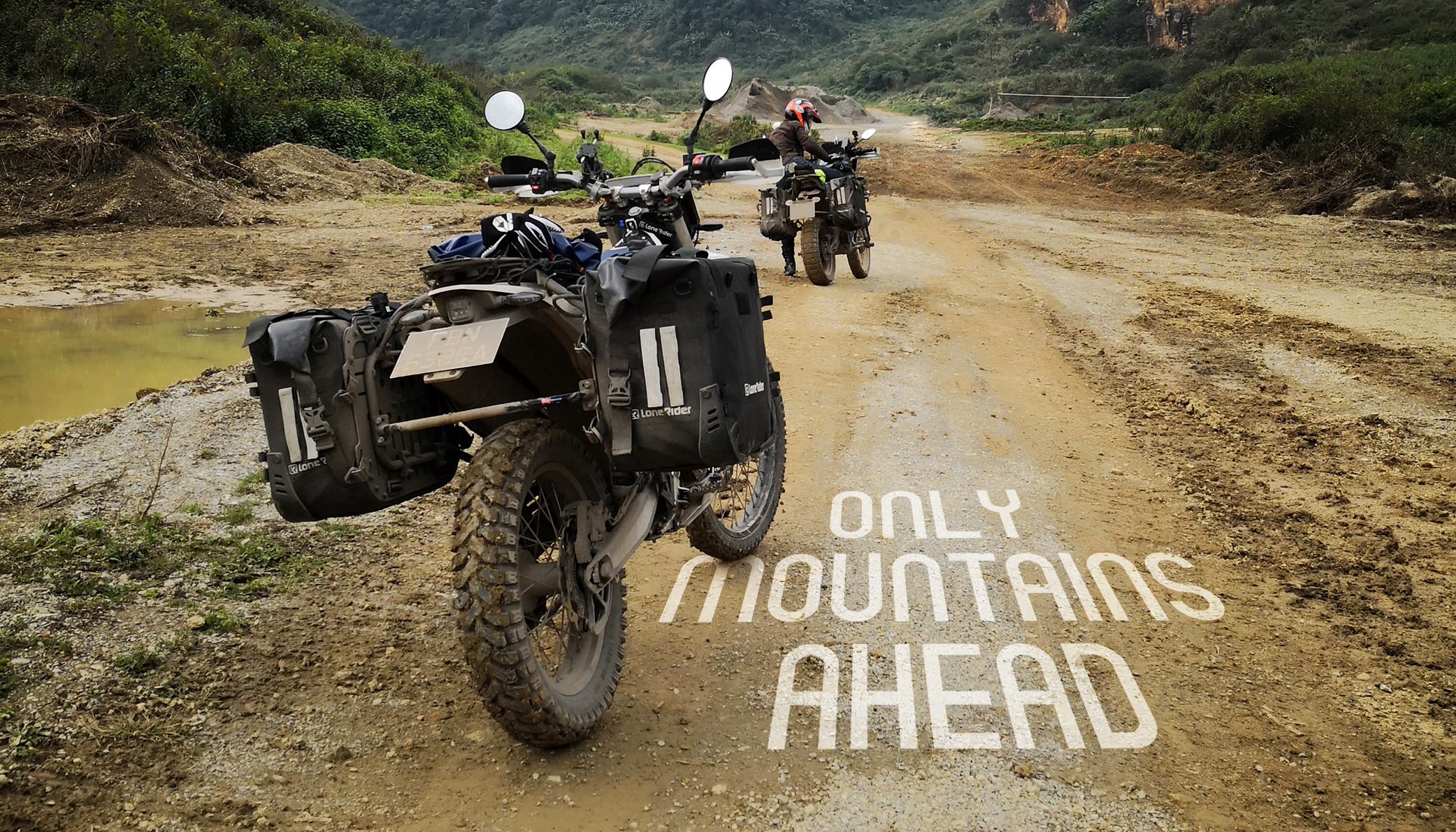 That’s right, aim your handlebars for Laos, and you’ll be leaving the salty beaches of Thailand behind. Landlocked, fortified by surging karsite cliffs and inhospitable tropical jungles, Laos is crowned with dubious honours – it’s the most bombed country in the world and one of the poorest in the region. But then, it is also home to the mother of all Southeast Asian waterfalls, alienesque blue lakes, magnificent cave systems, a vast field of bizarre stone relics, a former American military base once known as “the most secret place in the world” and at least two UNESCO heritage sites.

Officially the Lao People’s Democratic Republic, this communist state woos the adventurous with panoramic wilds, challenging terrain and unrefined infrastructure. On and off the saddle, you won’t find yourself short of thrills.

I understand a little about the timeless, slow-motion lure of Laos. Since 2013, I’ve been revisiting her dusty welcomes and I’m still not done discovering all her treasures. Interest piqued? Here’s 6 things to know about the land of sticky rice eaters.

1) Getting in on your motorcycle is NOT a piece of cake.

Riding up from Singapore or Malaysia, you’ll be entering Laos from one of the approximately 8 border crossing points from Thailand or Cambodia. Approximately, I say, because the rules at each border are infuriatingly inconsistent and it’s hard to be certain which ones will guarantee fuss-free entry.

Up until 2015, I was using a quiet little immigration point from Thailand’s pretty Nan district –  the Huay Kon station. Now foreign motorcyclists are being refused entry and exit at Huay Kon, and other popular border crossings like Chiang Khong/Huay Xai have started to demand guided tour escorts or “tourist permit fees” for large motorcycles, especially those travelling in groups of 3 or more. More on entry procedures and our harrowing recent border experience in the next article.

Currently, it seems like the best crossing point for moto-travellers into Northern Laos is the Thai-Lao Friendship Bridge 1 at Nong Khai / Vientiane. Keep an eye on the latest border situations here.

2) Laos is not for inexperienced motorists.

Laotian towns are built up closely around the main roadways. Animals and small children have a suicidal tendency to sleep and play in the middle of the road. Local motorists barrel out abruptly from hidden side alleys, hardly anyone seems to know what side view mirrors are for, and everyone is fond of making sudden u-turns in the middle of traffic. A throttle-happy foreign motorcyclist with a big-city riding mindset is a messy accident waiting to happen.

Loaded trucks ply the spartan, hilly road network daily. There’s often little wiggle room to overtake these crawling behemoths on the twisties – which means you’ll need to be gutsy and decisive on the throttle, or risk head-on collisions. Larger vehicles will also swerve unpredictably to avoid potholes, so you’ll have to give them a wide berth.

Then there are the “roads” themselves. For the most part, you’ll get friendly tarmac. But sometimes that bold line on the map turns out to be tyre-shredding rubble gathered loosely into the shape of a road, sprinkled generously with truck-sized potholes and served with a side of muddy landslide. Even major roads near the capital Vientiane aren’t always smooth.

With few modern motorcycle service centres in the country, your best bet for a “big bike” breakdown rescue is back in Thailand. Simply put – Laos affords moto-travellers little room for error.

While remaining astonishingly stagnant at the same time. Little Laos is the subject of China’s mega high-speed railway plans, and within 2 brief years, smog-spewing factories and colossal concrete skeletons have erupted across her rural outbacks. Ironically, outside of the direct path of China’s bulldozer progress, Lao’s own infrastructure suffers from neglect. Landslide damage on the Kasi-Nan road 4C has gone unrepaired for years, with government officials simply throwing their hands up at the scale of work required.

Now with China digging elbow-deep into Laos, who knows how the country’s socio-cultural landscape will change. We say, get to exploring Laos before Starbucks does!

4) You can buy dead naked porcupines in Lao markets.

For eating, presumably. Actually all sorts of dead things are for sale at Laotian wet markets, and these unlikely zoological exhibits often yield a tragic count of rare and endangered creatures. Well, no reason for you to chow on bush meat, with all the hearty noodle soups, sticky rice dishes and French pastries on the Lao menu. Even the humblest street vendors make divine baguettes.

On a side note, feeding yourself costs more in Laos than in Thailand. The average bowl of Lao noodle soup goes for 20,000kip (2.5 USD), compared to the 45 baht (1.5 USD) equivalent in Thailand.

5) Wander off the trail, and you might blow yourself up.

Laos isn’t the place to take your dirtbike for a romp in the woods. Here in the longest suffering casualty of the Vietnam war, people are still dying every year from unexploded mines. At today’s rate of bomb-clearance work, it’s estimated that it’ll take another 200 years before Laotian soil is completely safe again. Until then, locals have warned us to stick to marked trails.

6) Lao currency is worthless outside the country.

It’s true. I’ve heard of people using leftover Lao kip as wallpaper after their holiday. But don’t be looking at walls just yet – Phongsavanh bank on the Thai side of Friendship Bridge 1 (Nong Khai) will exchange kip for baht.

Don’t be in a hurry to get your kip too. Many Lao establishments will accept Thai baht or USD, but the exchange rate is entirely at their whim. Also, most currency exchange stations on the Lao side will give you better rates than in Thai border towns.

Or, like me, you could simply keep your Lao money for your next visit. You see, the first time I rode into Laos, I already knew it wouldn’t be my last.

In part 2 of this series: what you’ll need to prepare before motorcycling Laos. Keep your cursors close!

2 Alternative routes into Thailand to skip the Sadao jam