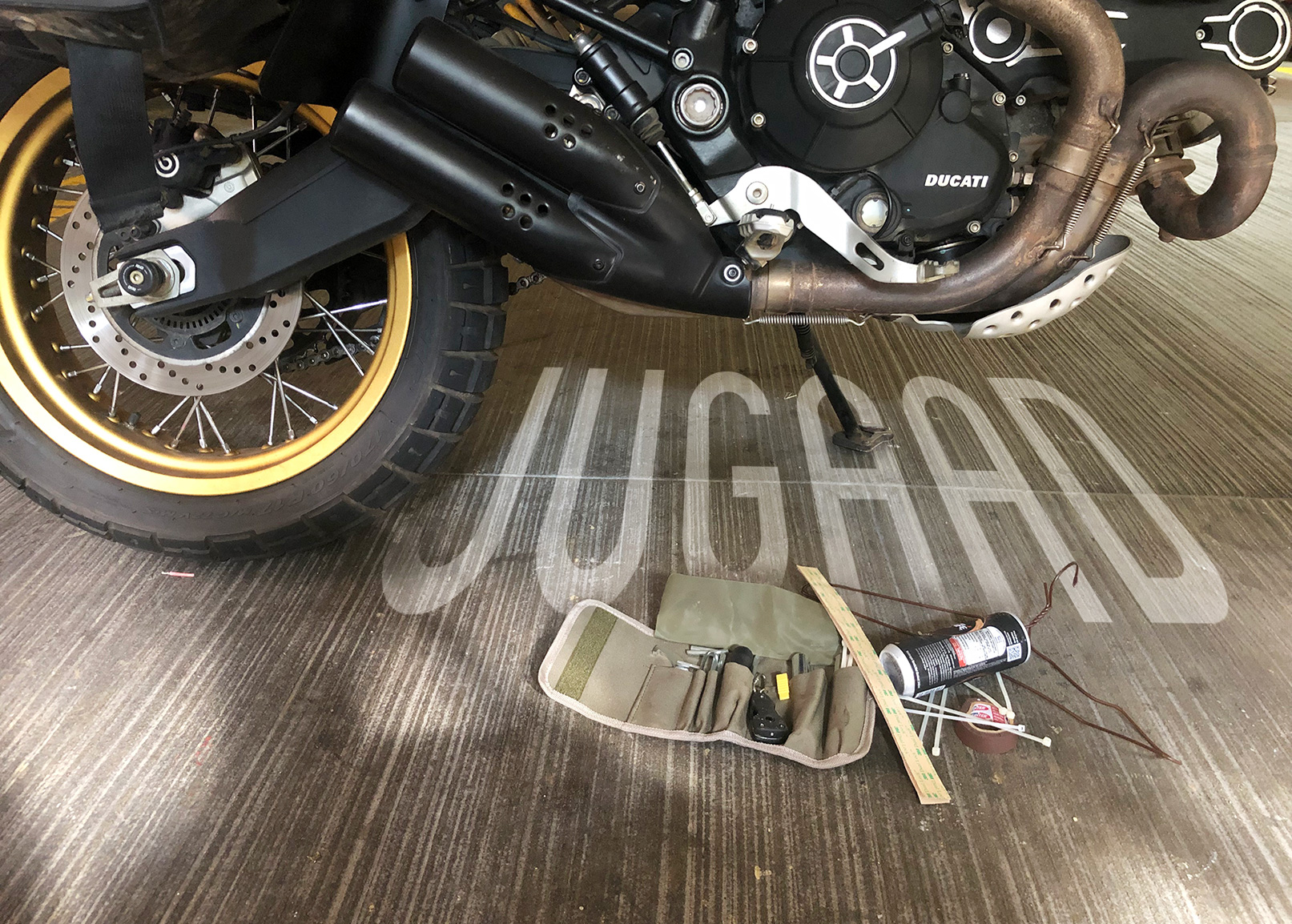 Tyre Plugs & Optimism: What to Prep for Motorcycling Laos

We embark on motorcycle journeys in search of many different things, but one thing we’re sure to find is: adventure.

Adventure is often spoken about alongside words like “danger” and “risk”. There is some truth in the dictionary’s definition – no matter the amount of planning, the unforeseeable will happen. But don’t be deterred, for there are little rewards with no risks! All it takes is a little mindset shift to get over this mental hurdle.

The Indians have a marvelous way of dealing with the unexpected. “Jugaad” is a Tamil term which translates roughly to “hack”. It is used colloquially to describe an innovative approach to solving problems with limited resources. Basically, very MacGyver kind of stuff.

The idea of Jugaad is built on the mindset that all problems can be creatively resolved if we put our minds to it! It also puts an end to the notion that all solutions must look perfect — in the context of motorcycle travel, a quick fix just needs to keep us going until we find professional help. Just knowing that the ride goes on is enough to make a difference. Jugaad is exactly what eventually changed my perceptions of motorcycle travel.

The first of many Jugaads

Close to a decade ago, the thought of riding thousands of kilometers and crossing entire countries was daunting. Eventually though, the excitement of embarking on an adventure surpassed the fear, and I set off on my first long ride with (or more like, following behind) my road-wise dad.

What an adventure it turned out to be! On the last leg of the journey, vibrations broke some screws in the air box of my borrowed Honda Shadow and eventually shook the rest off, resulting an air box ejection on the highway. The air box was recovered, but with cracks and wonky screw threads.

I was ready to give up. Oh no, time to call in a tow truck and abort the nearly-completed trip. Was it really? It was only a short trip, but somehow my old man had brought along a wire clothes hanger. A few minutes of tinkering later, the air box, stuffed with rags, was sufficiently air tight and secured to the bike, and we were ready to go again!

I wouldn’t learn of the word “Jugaad” until years later, but this experience helped me realise that more often than not, there will be a way out. These days, I first try to seek a creative, functional way to hold things together before a permanent solution becomes available.

Armed with this new mindset, I clocked more kilometers and logged more tales of Jugaad. Here are some of them!

Melted Kick Stand Paint
High mid-pipe heat melted the paint on the kickstand of a friend’s Triumph Thruxton. The kickstand then become stuck at the exhaust pipe. After a few rounds of muay-thai heel strikes, it finally got dislodged. To keep the problem from recurring, we performed some Jugaad with a drink can and cable ties!

Slashed Chain Lubricant Delivery Tube
A long, bumpy ride in Laos caused the drive chain on my Ducati Scrambler to swing into the auto chain oiler, slashing the oil delivery tube. I only discovered the leak when I noticed that my chain had become unusually dusty. No prizes for guessing what this calls for!

Melted Side Pannier
Poorly-judged placement of my panniers caused one side to become melted by close range exhaust heat. At that time, I was travelling in the rural regions of Laos, and had to Jugaad a series of quick, short-lived fixes which were flung off every time I hit a patch of rough roads. Eventually I rolled into a town where canned beer could be found – which was exactly what I needed to patch the hole until returning to Singapore.

It seems that the same few items are frequently popping up in my stories of Jugaad: metal clothes hanger, tin can, cable tie, electrical tape…. What these have in common is that are they are generally flexible and can be adapted for various uses. Isn’t this the very spirit of Jugaad? There is a lesson to be learnt – we should be flexible and adaptable in order to explore the unknown!

If you still have doubts about embarking on that dream trip of yours, perhaps you could simply pack some of these items and go. At least you’ll have some handy resources for Jugaad close by! Remember, it doesn’t need to be pretty, it just needs to get the job done.

What Jugaad solutions have you come up with on the road? Let us know in the comments below!