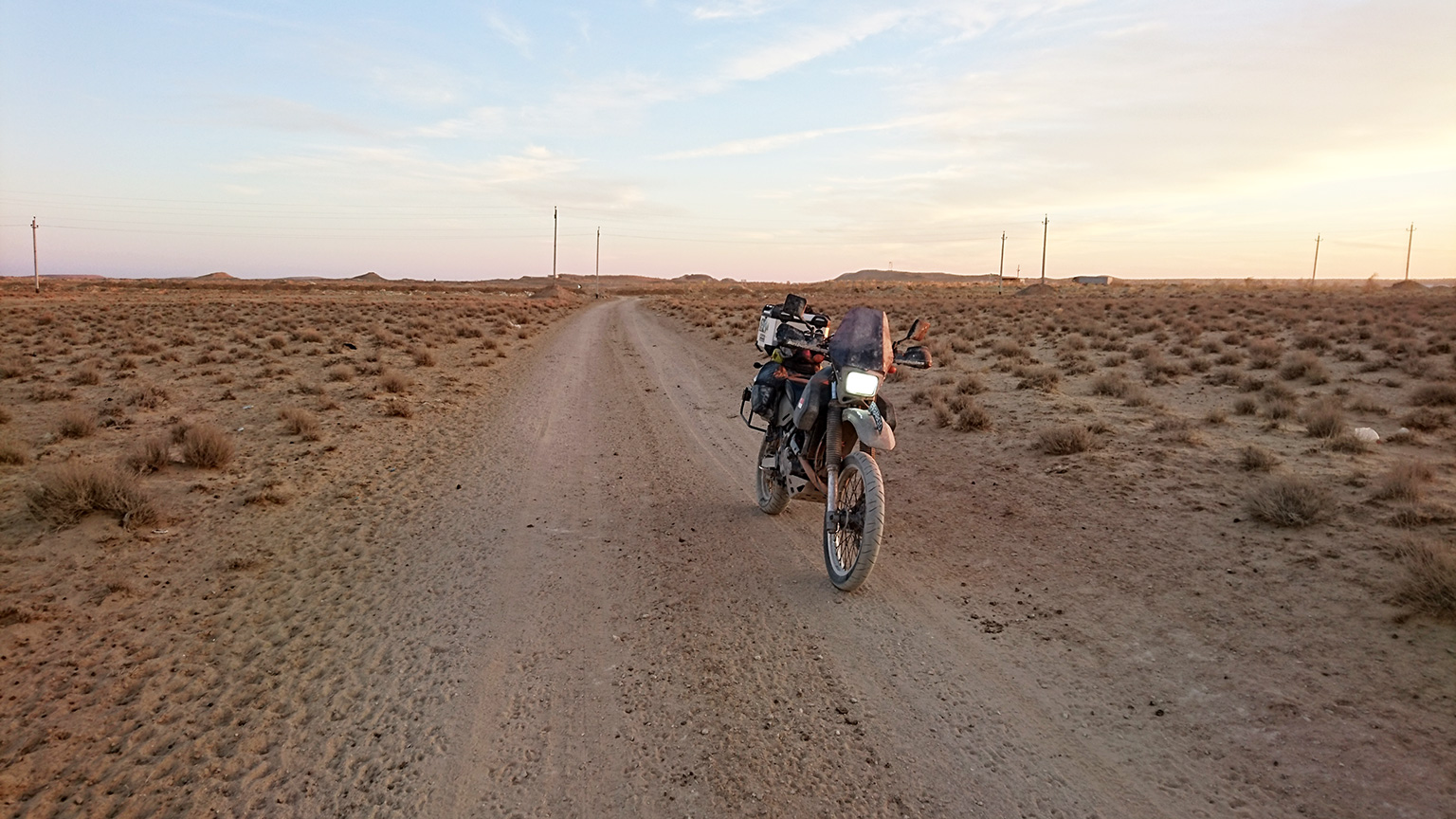 Ladies, if your fully loaded motorcycle has never been methodically strip-searched by surly men in uniform bearing large guns, let me tell you that it’s not as sexy as it sounds. By the time you are allowed to leave Uzbekistan, the authorities will have scrutinized more of you than your parents probably have – down to the last crumb of chicken seasoning in the deepest crevices of your moto luggage. So it is that when I arrive at the border of the least visited country along the Silk Route, an entire morning of precious daylight hours has fled. It is October 2016; I am a hobo in the saddle of a ’99 DR650 named Spiderpig, and have just banded up with six other Singaporeans to brave the wild frontiers of Central Asia.

Of course, one does not simply waltz up to the doorstep of Turkmenistan. There’s a reason why it’s one of the least visited countries in the world – prospective tourists suffer expensive border taxes, grueling paperwork and a mandatory agency-guided tour. To get myself and Spiderpig into this isolated totalitarian state cost me just over 700 SGD and months worth of application processes. It’s clear that the road to hell is paved with red tape.

I mean Hell, literally. This is the reason why we have come to Turkmenistan: to get up close to one of the most magnificently bizarre natural phenomena on the planet (no, it’s not the North Korean president’s haircut) – the Darvaza Gates of Hell. Somewhere amid the apocalyptic nothingness of the Karakum desert – which makes up 70% of the country – this gaping pit of fire has burned continuously for almost five decades. I imagine the devil’s got a steep electricity bill.

But first, we have nearly 300km of desert to cross. Isham, our guide from Stantours, hustles us through the necessary at the Turkmen border; it all passes in a blur of Russian, beards and stacks of money. We roll into Koneurgench town for a hurried lunch of dograma, and then are horrified to discover that cigarettes cost 30USD for a very squashed pack from a convenience store’s hidden stash.

Smoking is not allowed in this country, Isham explains. In fact, alot of things are banned in Turkmenistan: social media, cigarettes, black cars, dirty vehicles in the capital city Ashgabat, being out on the streets after 11pm, taking photographs of public buildings in Ashgabat, idle talk of the President for Life, overtaking the President for Life in a horse rally or on a golf cart, freedom of speech, freedom in general and so on. Welcome to the most repressive regime in the post-Soviet clubhouse!

We stock up on food and water before tackling the desert, and less than an hour into the ride I am hysterically glad that nobody bought any raw eggs. The road south of Koneurgench deserves special mention for being the most ridiculously shitty that I have ever motorcycled, and at this point on the journey I can reference over 30 countries. It is neither sand nor gravel nor any other semblance of dirtway that I am familiar with, but rather a tortured ribbon of drunken ripples, bus-sized potholes and suddenly-jaywalking camels. I manage a brave 30 to 50kmh, alternating between foul curses and praying that my front rim doesn’t suffer a dent. We encounter no other persons along the way, which is unsurprising, given that Turkmenistan shares the same 5.6 million population size as Singapore, yet is 680 times our land mass. Meanwhile, daylight dwindles.

As the sun bleeds her last, the tarmac smoothens out briefly before our guide’s 4×4 turns off onto an unmarked path into the sand. Abruptly, we are in a Mad Max movie set. As the dunes swell, the sand grows treacherously softer and true night encroaches. It is decided that we will park the bikes at the dunes’ edge, unpack our camping gear and ride the 4×4 to Hell’s Gate.

What follows is a madcap rollercoaster in pitch darkness, the headlights slicing the night like rogue lightsabers. We are shrieking like delinquents. Finally the 4×4 crests a dune, and before us, a glowing red scar the size of a soccer pitch splits the ground.

Nothing quite prepares you for the sound, sight and fury of Hell’s Gate. Up close, the crater roars in permanent rage like a demon thwarted, and the downwind column of heat threatens the eyebrows on your face. But desert nights are chilly, and when I lay my palm to the ground at the pit’s edge, it is startlingly cool.

There are no souvenir shops, no food stalls, no street kids begging for spare change. Nothing here underscores our privileged tourist-dom, save Isham and his crew who are assembling our dinner in the lee of a dune. We scramble to pitch our tents before the howling wind drives too much sand into them. Constellations engulf the space above, shots of local brew warm our bellies, and the world’s largest campfire glows ahead. What d’ya know – it’s heaven, hell and everything in between.

The next morning we backtrack to the bikes and swing our handlebars southward toward Ashgabat, the most be-marbled city in existence, according to the Guinness World Records. The bikes get a wipe down first, because dirt and grime are against the law in Ashgabat; coincidentally all the carwashes are run by relatives of the president.

Ashgabat rises as a glistening bubble out of the rugged sands, like the Emerald City in the Land of Oz.  It’s a brash reminder that her ruler has the unchallenged power and resources to alter the very landscape of a stark desert kingdom. Ashgabat, where gold presidential statues and  gilded domes tower over empty, spotless streets; where an army of shrubs are manicured to sinister perfection and lavish fountains dance 24-hours to an audience of none; where immaculately dressed locals make no misstep even behind closed doors, and where our hotel rooms are bugged, our luggage is searched and our every move is supervised by hidden government officials. Ashgabat, the eerie, sterile heart of a country enthroned on vast oil and gas reserves, yet nurses extreme poverty on her arid fringes. Ashgabat, the city I have nearly no photographs of, because police show up every time I pull out my mobile phone.

Just when I think that Turkmenistan could not surprise me more, it pulls one final shocker on the morning that we leave Ashgabat for the Iranian border. We have checked out of our rooms and loaded up the bikes, but I head back into the hotel for the toilet. I turn down the wrong corridor and stumble upon a half-closed room of uniformed soldiers who are being briefed authoritatively by a person I believed to be the bellboy – all this time, the subservient character shouldering my luggage and pretending not to understand English has actually been a spy keeping tabs on us foreign devils. Seeing me, he exclaims and shuts the door. I hurry back out into the courtyard and fire up Spiderpig for one final ride out of the marbled city, just another infidel fleeing a hollow utopia.