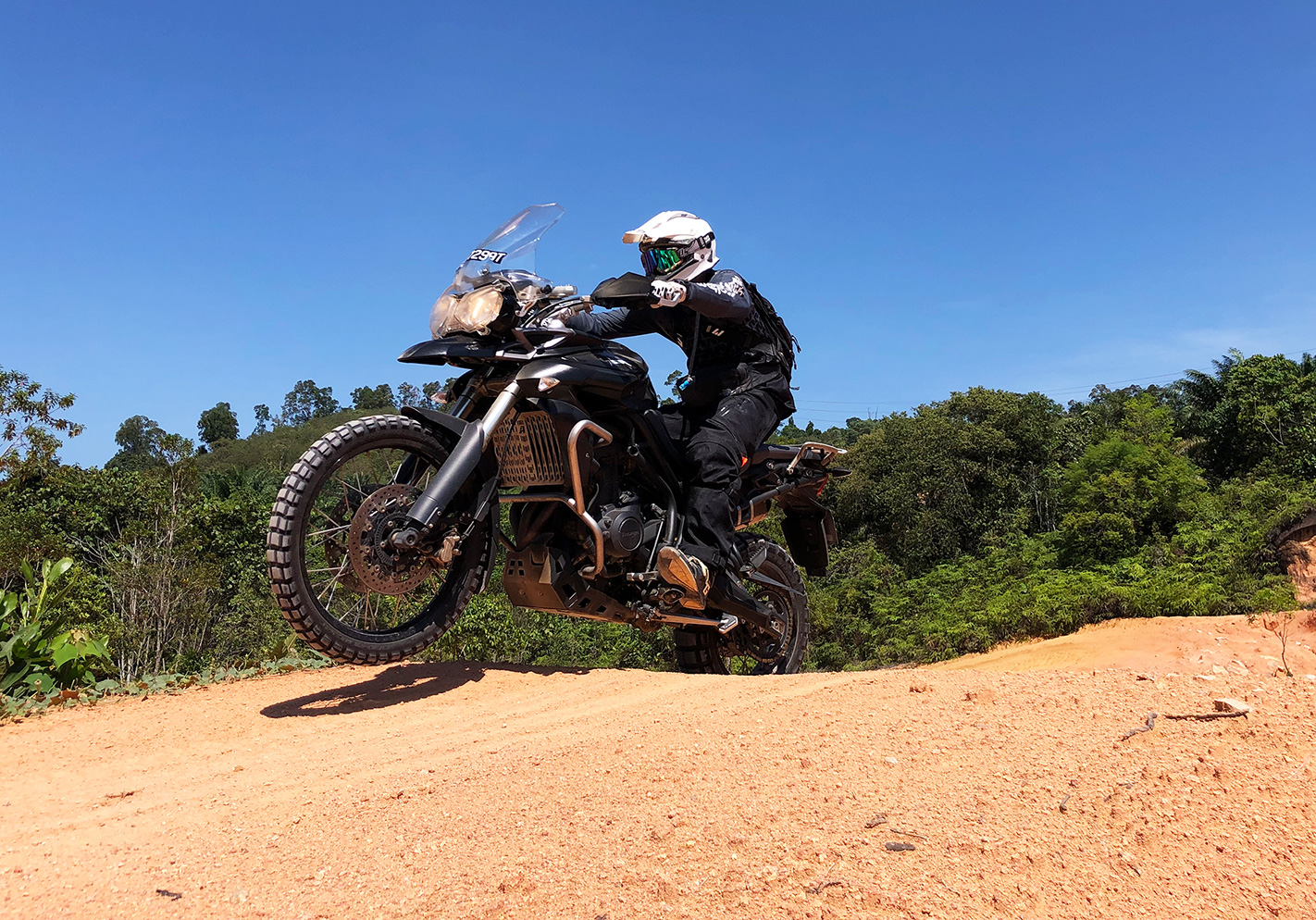 Touring on Sports Bikes: the Low Down

15 years after Ewan McGregor and Charley Boorman first began falling off big, expensive bikes in Mongolia, the adventure motorcycling segment is still on a boom. But even before the pair made mud-splattered Beemers fashionable, they were inspired by one Ted Simon, who rode over 100,000km across the world, in 1973, on a Triumph Tiger.

This is news because we Rude scoundrels love a challenge to the status quo. For years, the heavyweight category of the local dirt-sport scene has been dominated by BMW, KTM and Honda, and it’s great to see Triumph bringing more than just English charisma to the game.

Wearing the instructor’s helmet was Benny Roth, founder and race director of Ulu Choh Dirt Park, the largest structured offroad grounds in Johor, Malaysia. With 12 years of offroad racing experience over various countries, he’s a familiar face in the local dirtbiking community. So were most of the participants for that matter – at least half of the 8 Singaporeans enrolled were local enduro race veterans. You needn’t have told them that piloting a 200kg beast in the rough stuff is quite different from slinging a 100kg dirt bike around. For some of the other riders joining the class, this was their first offroad experience.

Sunday’s lineup was largely a parade of Tigers, in both the 800 and 1200cc incarnations; no surprise there since it is Triumph’s flagship adventure model. For 2019 though, Triumph has one more bull in the arena: the new Scrambler 1200. Unlike its predecessors, which were more style than function in the gritty world of adventure travel, the newest Scrambler proves shockingly competent on gravel, hill climbs and single tracks. It comes in 2 variants – the more tarmac-biased XC and the XE, which boasts more aggressive offroad geometry. At the heart and bones of things, they’re pretty much the same motorcycle.

Watching Benny bounce the parallel twin around like an excited puppy, it’s really looking like a naked adventure bike. Let’s be clear – the 2019 Scrambler is still at least 100kg heavier than the average dirt bike, so it’s not going to win motocross races. But it comes with a slew of upgraded features that would make mountain trails in Thailand a feasible, fun detour. Improved suspension travel, greater ground clearance, offroad-friendly electronic modes, 21 / 17 inch tubeless spoked wheels, slim ergonomics and a wider handlebar. Just one gripe – the high exhaust pipes roast your inner thigh and get in the way of gripping the tank.

Can local Triumph owners expect a sequel to this offroad clinic? Likely so, according to Triumph Singapore. The idea isn’t to produce a league of Dakar-ready Nick Plumbs, but to offer a friendly environment for riders to dip their toes into a new sport, while also bolstering their confidence to venture wider, wilder. For the rest of us who don’t own a Triumph, look aside from the marketing blitz and appreciate that there are tantalizing new flavours on the local adventure menu.

For more sights and sounds from our day in the dirt with Tigers, visit us on Facebook and Instagram.