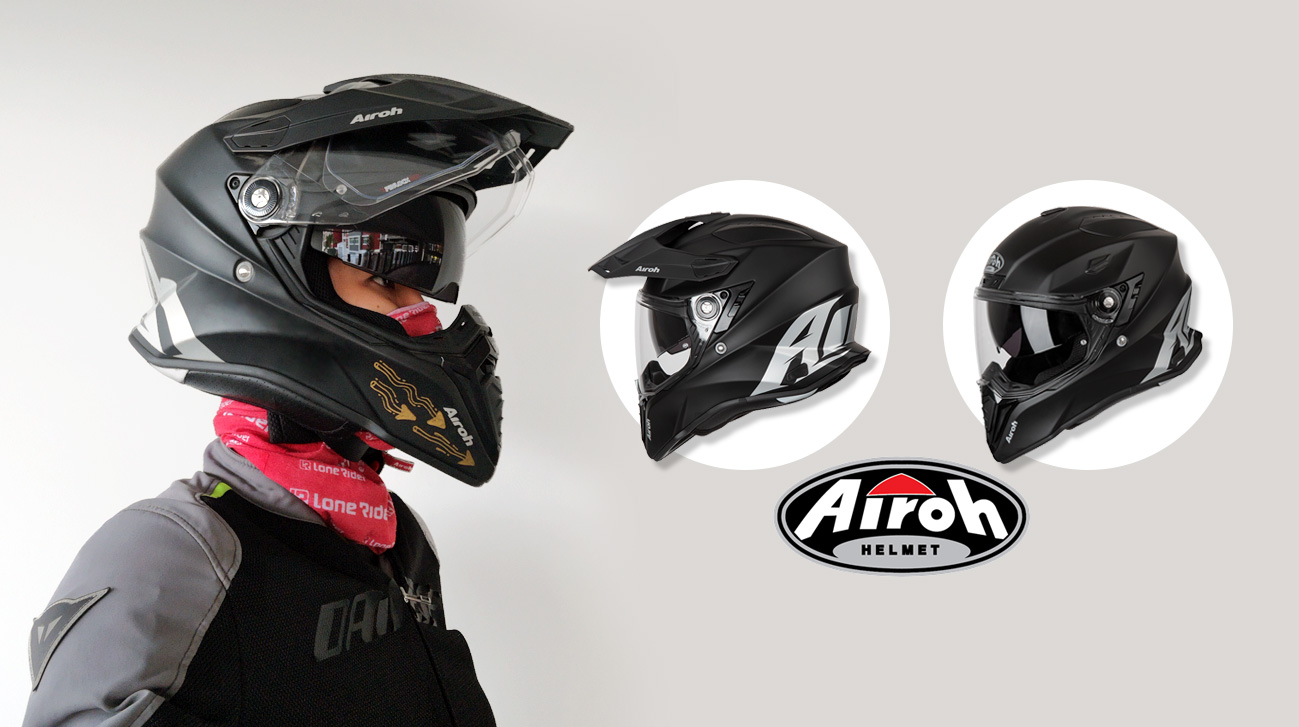 Unless you need to pick your nose at traffic lights, an open-face helmet is a poor protective investment. Think of helmets as so much more than expensive tupperware for your brains; they’re the only thing standing in the way if the road, or cars, or a tree, decides to punch you in the face. In fact, that’s exactly what happened on last year’s ride in India, and thanks to a full-face Shoei, I found myself shopping for a new lid instead of paying for facial reconstruction surgery.

The Airoh Commander All Terrain arrived in Singapore late 2018, bolstered by the Italian brand’s reputation for ultra light, ultra expensive motocross helmets. It comes in at a similar price band to my old Shoei Hornet Adventure, but at half a kilogram lighter, with a retractable sun visor to boot. When I tried it on at Regina Specialties last year, there were hardly any user reviews online, but HALF A KILOGRAM LIGHTER. I gave the store my money. 10,000km of journeys under the vagaries of tropical weather later, here’s how the Commander has held up in comfort and function.

The Commander is not carbon fibre, but it’s almost. The shell is High Performance Composite Fibre, which – to cut the geek speak short – is a close second to carbon fibre helmets in weight, impact resistance and cost. From afar, the Commander’s predatory aesthetics are arresting; up close, it feels robust and stoutly constructed, and is certified to European ECE 22.05 safety standards. The helmet’s matte black finishing and rubber trim have not degraded nor become sticky despite a near-daily regime of sun and rain.

Both the main visor and tinted sun visor have delivered consistently smooth sliding action even after some dusty weeks of riding in Laos. The main visor, touted to be “Scratch and UV resistant”, hasn’t picked up any nicks yet. The first few weeks in, I was baffled by a bizarre rattling sound that seemed to originate from the sun visor’s mechanism, but this disappeared after awhile. Gremlins?

The Commander comes in two shell sizes and 6 inner pad sizes: Shell 1 for XS, S and M, and Shell 2 for L, XL and XXL. If, like me, you are a medium with Arai, Shoei and Acerbis, the sizing runs true with Airoh as well.

The cut is nowhere similar to the other brands though. With Shoei and Arai, the pressure points were on the hairline above my forehead, while the Airoh Commander is tight against the upper half of my ears and back of my head. It took a few rides to break in well. Papaya-skulled, broad-eared aliens beware – this might not be a comfortable fit.

The helmet fastens with a classic double D ring system – and with a chin strap that is awkwardly short. Here, let me show you what I mean:

Hullo Airoh, why get miserly with the fastening strap when everything else about the build is flawless?

This is easily the lightest multi-sport helmet I have ever used, and also the noisiest. Admittedly, the *mildly altered* Husqvarna 701 is also the loudest motorcycle I’ve ever travelled long distances on, and after a full day on the road I am deafer than a roomful of grandmothers.

The upside of it is that ventilation is top notch. With generous vents at the chin, above the brows and top, heat build-up at any speed is significantly reduced. In our steamcooker climate, this lightweight, breathable lid makes all the difference between riding fun and fatigue.

Cheek pads are plush and not scratchy; they are removable, washable and – for those of you with sensitive skin – hypoallergenic. Removing and replacing the pads is an annoying struggle though; I’ve been pampered by the easy snap-in-snap-out fitment that Shoei uses.

An extra wide eyeport delivers a generous field of vision that allows you to react quickly to any large predator coming up alongside your motorcycle, such as the traffic police or a bus overtaking stupid-fast. I can eyeball up to my 3 o’clock on either side. Spectacle users will be able to slide a thin pair in, and MX googles fit just as well as with any dirt sport helmet.

Blistering sun and relentless rain – the Commander fends off these two demons of the tropics with an easy-action retractable sun visor, UV-resistant clear visor and anti-fog Pinlock. Even with the air vents fully opened, I haven’t had problems with the rain getting in.

The helmet’s aerodynamic lines and short peak also take on wind blast like a champ. My Husqvarna 701 has no windshield, but I cruise the highway at 130kmh with minimal head buffeting. At 100kmh I can still turn my head to the side without feeling like it’ll get ripped off.

Airoh has also set this one up for the tech-equipped. The Commander is primed for bluetooth communication sets, with indents over the ears and an opening at the base for wires to thread through. I used a Sena SMH10R with no complaints, aside from the extra tightness over the ears. Out of the store, the helmet comes with accessories that allow you to screw a Go-Pro mount onto the top.

For those who straddle multiple motorcycling disciplines, the biggest draw of the Commander ought to be its sheer versatility. The removable peak and visor allow it to be used for road, dualsport and offroad, without losing an ounce of its fierce handsomeness. Oh, I’m sure you’ve seen one of those other helmets that suddenly look like a rice cooker after its peak comes off.

For an upper-mid-priced helmet, the Airoh Commander is chock full of prime features that appeal to both vanity and practicality. Chief of it is its weight – or lack of it – and breathability, which make it a terrific choice for Southeast Asia’s riding conditions; even more so if you expect to be sweating it out on rougher terrain. As you can probably guess, I love it. Regrettably, this is not going to be a helmet for everyone, because of its unique fit that will be awkward for some head shapes. Try the Airoh Commander on at Regina Specialties, where it retails for 420 SGD (matt black).

Connect with us
View Comments (14)

Stay ahead of flat tyres with FOBO Bike 2