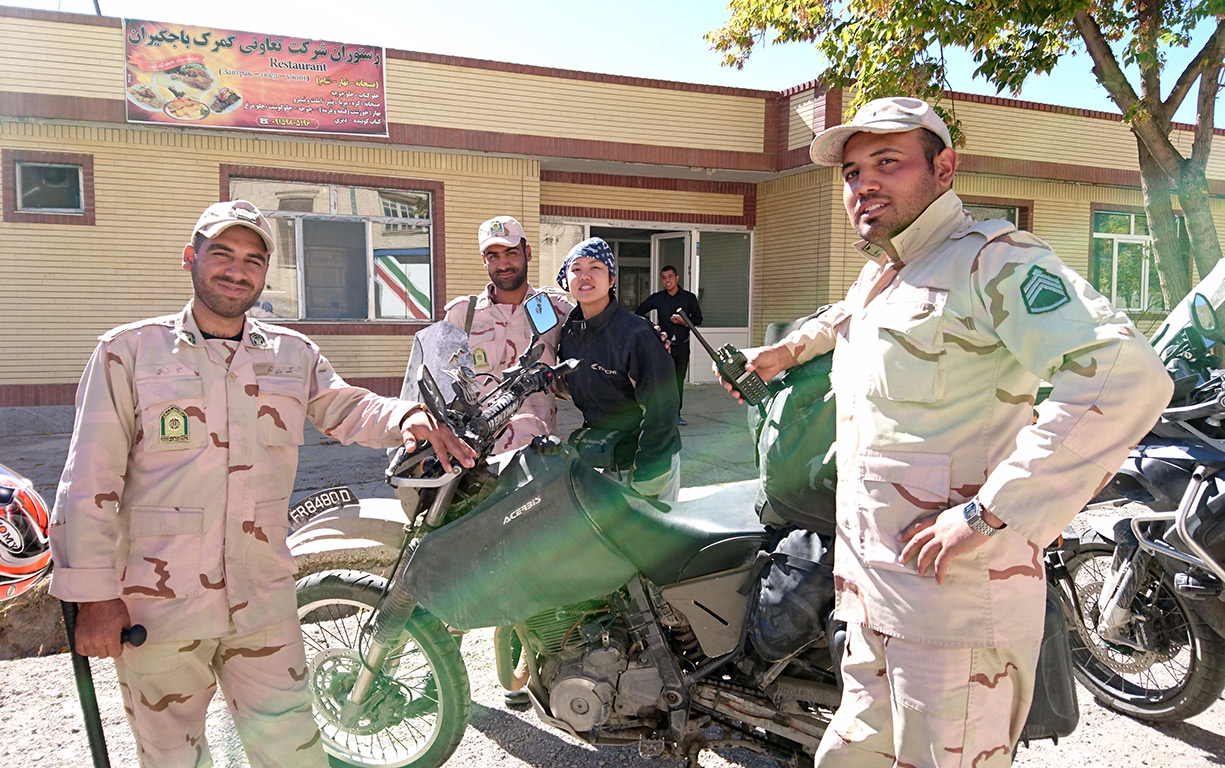 It is October 2016, and longstanding US sanctions have only recently been lifted from Iran, a country abjectly vilified by Western media. I have just trotted across Europe, Scandinavia and Russia on a ’99 DR650 named Spiderpig, and banded up with six other Singaporeans to brave the wild frontiers of Central Asia and Iran. Here are excerpts from a travel-worn diary:

After a surreal couple of days in Turkmenistan, Iran welcomes us with fabulous tarmac – smooth roads have been a rare treat lately – and sweetly undulating mountain ranges. At the Bajgiran border station, the motorcycle Carnets are sorted with Iranian efficiency by a Jerry Seinfeld lookalike, but it still takes a few hours before we can be tucking into luscious, fluffy basmati rice at the first village eatery we see. No fixer needed, just time and good humour.

This close to the border, soldiers outnumber civilians on the street. I haven’t yet made a habit of putting on my head scarf whenever I pull off the helmet, and I quickly learn that this will earn me stares and scowls. In a country where the strict Islamic government has banned women from riding motorcycles, I suppose I should exercise an outlaw’s caution. But the uniformed men disarm me with their friendliness and curiosity.

Riding under a sprinkling of rain, it is cold, cold in the foothills of the Alborz mountains. Ahead lies the bejewelled Caspian sea, to the southwest sprawls the metropolitan tangle of capital city Tehran, and on the horizon, muscular ridges swell skyward.

The northern air chills, but the warmth of Iranian hearts is second to none. Everywhere, we are pressed with offers of tea and food, babies are held aloft for photos, and there is genuine curiosity about our journey.

The road through Gorgan turns out to be a macabre slideshow of Iranian highway justice, where mangled vehicle carcasses are strung up as cautionary tales. More dramatic than the usual speed limit signages for sure, but not necessarily more effective, judging by the vehicles hurtling past us. Then of course, we get pulled over by the local police. They want to inspect our paperwork, and more importantly, these large alien motorcycles which clearly deserve to be photographed. We will hardly be turned into social media stars though – Facebook is illegal here.

It isn’t long before we are sent on our way – right into a traffic jam. A two-day long religious festival clogs up the roads with drums, street parades, mass self-flagellation and animal sacrifice. A bull’s arteries empty out onto grass and tarmac, staining tyres and adding a keen metallic tang to the oily vehicular fumes. It’s all cacophony and chaos, and the inside of my helmet reeks of sweat, but I have to smile because it reminds me a little of the Southeast Asia I call home.

Here’s the thing I’ve discovered about Iran: make eye contact with local people for any longer than 2 seconds, and you’re quite liable to be taken hostage by hospitality. So it is that our dusty little troop has been invited into the home of Professor Bahram and his brother, who is somewhat of a local celebrity and guru of traditional Iranian music.

“You are standing in the motherland of music,” declares Bahram, whose velvety English would put many of my friends back home to shame. “Rhythm came from Africa, but the notes came from here, Persia.” Behind closed doors, the hijabs come off and the family breaks into an improvised drum-and-song. Bahram’s niece, all hair and hips, lets loose a sensual Arabic dance. Aside from Bahram, none of them speak much English, but are generous with their hugs and laughter. My tummy swells with tea and sweetmeats; my heart is near exploding. But Bahram is cautious not to let the revelry get too loud; if the police get wind of this, we will all be done for. You see, music at this time of the day has been banned by the cadre of religious clerics whose word is iron law in Iran. The irony is stark as it is cold. Self-expression, now shackled in what was once the birthplace of cultures.

We put our backs to the Caspian sea and plunge down the famously scenic Chalus highway. The winding way is peppered with distractions – streetside hawkers, the impossibly turquoise waters of the Amir Kabir dam, and holidaymakers parking willy-nilly for photos. Skirting the metropolitan crush of capital Tehran, we make instead for the third largest city of Iran.

Isfahan nesf-e jahan, they tell us, meaning “Isfahan is half the world”. Four centuries ago, it was the glittering seat of Persian influence, gilded in rare artistry and architectural marvels; today, a polluted, war-scarred city that is the epicentre of Iran’s nuclear research, and a symbol of her reckless modernity.

Strolling over the 33 arches of Isfahan’s longest bridge, and then across the sprawling magnificence of UNESCO site Naqsh-e Jahan Square, can still summon echoes of that distant Golden Age. For a wide-eyed traveller, it’s much to take in.

Dodging the persistent merchants of traditional handicrafts, silverware and Persian carpets at the Grand Bazaar in the Square, I take a breather on a shaded kerb. Presently, a young Chinese man comes by and strikes up conversation, delighted to be able to flex his beloved Mandarin. He arrived here from China a year ago, alone, a pork-eater in an alien land of Shariah rigidity, to seek his fortunes. Today he owns “very many” carpet shops in the Grand Bazaar, and plans to acquire more. I ask if his Persian carpets are made locally or in China, and to this he only replies with uproarious laughter. To me, it is the very sound of a brave new economy.

Part 2 of the Iran moto-travelogue continues southward down the Silk Route, as the author swings her handlebars toward the waterless centre of modern-day Persia – encountering ancient towers with gruesome pasts and other mystical artifacts from 5000 years of fertile history. Read it here.