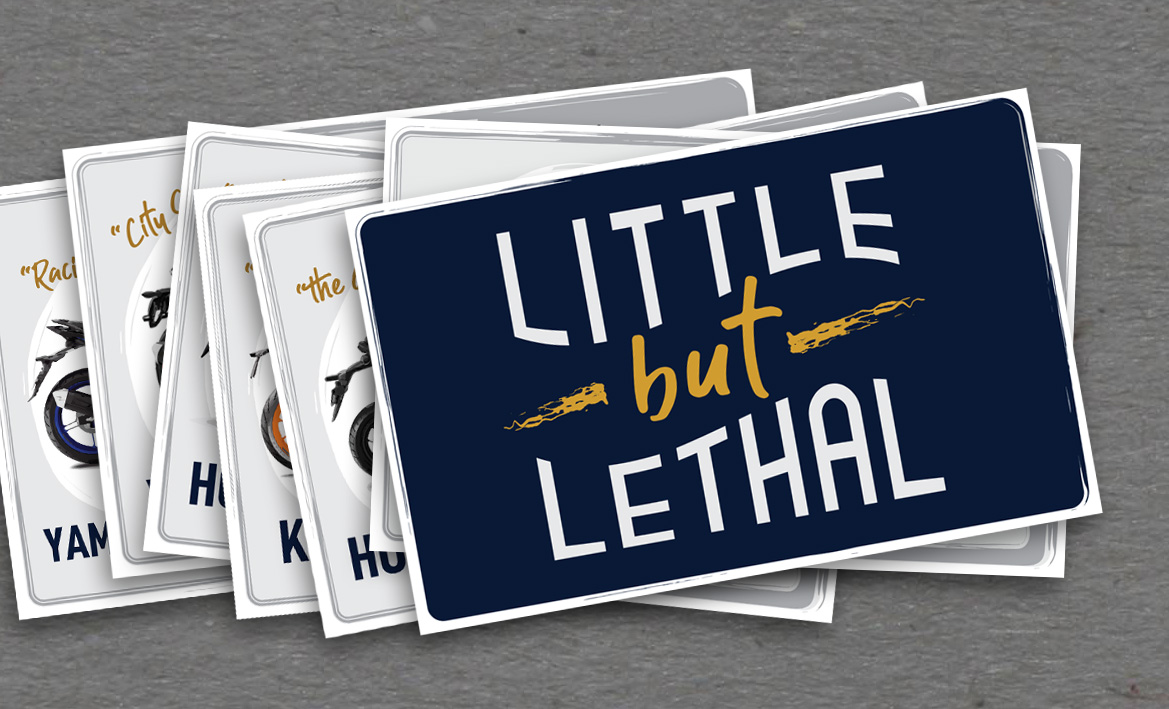 They’re not going to break land speed records, but that’s not the point. These small displacement machines are confidence-inspiring and cost less to buy and maintain than some high-end bicycles. Best of all, you can get one with a beginner’s license.

If there’s a group of people who can attest to the urban-worthiness of a motorcycle, it’ll be those who depend on them for a livelihood. We polled dispatch riders in Singapore on what they love and loathe about their sub-200cc workhorses. There are so many great little bikes out there that it’s tough to shortlist common favourites, but the following selections have these in common: they’re reliable, economical and among the latest models available. Also, they don’t look too absurd with a large, bright-coloured box strapped to the back – which is why you won’t be seeing any sportsbikes on the cards.

Here’s one thing to appreciate about the ubiquitous “cub” – its versatility means people use it to ferry anything from a sack of cabbages to a skinny family of five-plus-dog (don’t).

For that reason, underbone motorcycles are the understated lords of the street in Southeast Asia, and the Sniper 150 is arguably their pack leader. With racing DNA backed by multiple regional track victories, it’s also a commuter favourite for its beginner-friendly size, reliability and sensible fuel economy. The Sniper’s rear-positioned foot pegs offer an aggressive riding stance without the cramped posture of a sports bike, so you can go on shredding the egos of riders on larger bikes for longer stretches of time. Goes to show that “cubs” these days are no longer the metal rickshaws of our parents’ times.

Get one in Singapore for around 5,000 SGD without COE.

Honda gives the humble scooter some athletic cred with the ADV 150, petite sibling of the intrepid 750cc X-ADV. Despite the family resemblance, don’t expect the wee ADV 150 to embarrass any proper dualsport models in extreme terrain. Its longer suspension travel and upright riding posture only means you’ll be more comfortable over speed bumps. It’s a sight more handsome than Honda’s PCX though, boasts a flashy digital console, and is nimble enough to take on CBD traffic jams. While local riders love the ADV 150’s easy handling, roomy underseat storage and economical, fuss-free maintenance, they point out that it needs some upgrades to handle long tours – starting with a taller windshield and a comfier seat.

Get one in Singapore for around 6,000 SGD without COE.

Thrill-seekers, listen up. This Austrian filly really packs in the ponies. Riders may complain that it’s jumpy in low gears, but they’re secretly damn pleased to leave everyone behind at the traffic lights. The trade off for grin-inducing performance? Although made in India with an Austrian pedigree, the Duke 200 isn’t the cheapest small bike to maintain, and the engine can get uncomfortably hot in heavy traffic. Its higher power-to-weight ratio means you can count on this ride to deliver pizza steaming hot, but not necessarily in one piece. But who cares – you can have fun while delivering ugly pizza.

Get one in Singapore for around 10,900 SGD without COE.

The joke goes that you might have to Fred Flintstone this thing to get it going when the AA batteries run out… but when you consider the phenomenal fuel economy on the MSX125, the laugh’s really on the rest of us. Known also as the Honda Grom, this pocket-sized thumper might not accelerate much faster than your supermarket trolley, but it’s cute as hell, boasts quality components and can fit in your HDB lift. Its useable power and no-brainer handling make the cheery Grom a ton of fun for both beginners and experienced riders looking to flex their stunt chops.

Get one in Singapore for around 5,000 SGD without COE.

It looks like someone took a shrink gun to Yamaha’s thrilling bad boy, the MT-09. The MT-15 gets style points for its muscular, big bike silhouette, and a face right out of a Transformers movie. Looks aside, it’s the relaxed ergonomics, agile handling and whopping fuel economy that make this a likeable package. The MT-15 also puts out a punchier low-end than the air-cooled FZ-16, another long-running Yamaha stablemate that has proven popular among dispatch riders. Perfect for pulling out of tight urban traffic and the occasional long ride, if you’re not in a hurry.

Get one in Singapore for around 6,000 SGD without COE.

Since designer coffee is half the reason why Neo Cafe Racers exist, this genre of motorcycle probably wont be falling out of favour among city-siders for awhile. While many are sold on the CB150R’s looks alone, it’s worth pointing out that the cafe racer riding posture tends to put strain on the wrist and lower back – not something you’d want to discover during an ambitious road trip.

The CB150R’s got more than style going for it though; it boasts some nifty performance parts from its larger siblings, including inverted forks from the X-ADV 750 and radial brake components from the CBR1000RR superbike. Another perk for individuals who need to stand out: this made-in-Thailand beauty is infinitely customisable, with plenty of affordable accessories to scratch that creative itch.

Get one in Singapore for around 6,300 SGD without COE.

The United Kingdom has given us many strange and wonderful things, like Pink Floyd and Top Gear’s Jeremy Clarkson, and you can now add Mutt Motorcycles to that list. This Birmingham-born custom motorcycle house debuted in Singapore just last year, making fun-sized custom bikes more accessible – and legal – here. Turns out that what the cool kids want is a moody, blacked out little city scrambler with chunky wheels, which looks as British as the Peaky Blinders but is really built around the heart of the placid Suzuki GN125 engine. The Fat Sabbath has already found fans here, with first-time riders delighting in its lightweight, friendly handling and exotic, unpretentious looks. Oh, and with a top speed of 110kmh you’re unlikely to be racking up the speeding tickets.

We must confess that we haven’t seen the Fat Sabbath delivering pizzas, and we’re pretty sure the craftspeople at Mutt Motorcycles will be mortified to be mentioned alongside garden-variety bikes in this list, but we’ve got a feeling this wildcard choice will only get more popular. So we’re calling this one out first.

Get one in Singapore for around 15,200 SGD including COE.

At the time of writing this article, the world is in the grips of an unprecedented pandemic. Cities have ground to a halt and people are shuttered at home. Households are counting on dispatch riders to deliver food and essentials, and many of you who have lost their jobs to the crisis are joining their ranks. We would like to thank you for keeping things moving, but also implore you to stay alert and sensible on the roads, especially if you are an inexperienced rider clocking long hours. Get home safe!