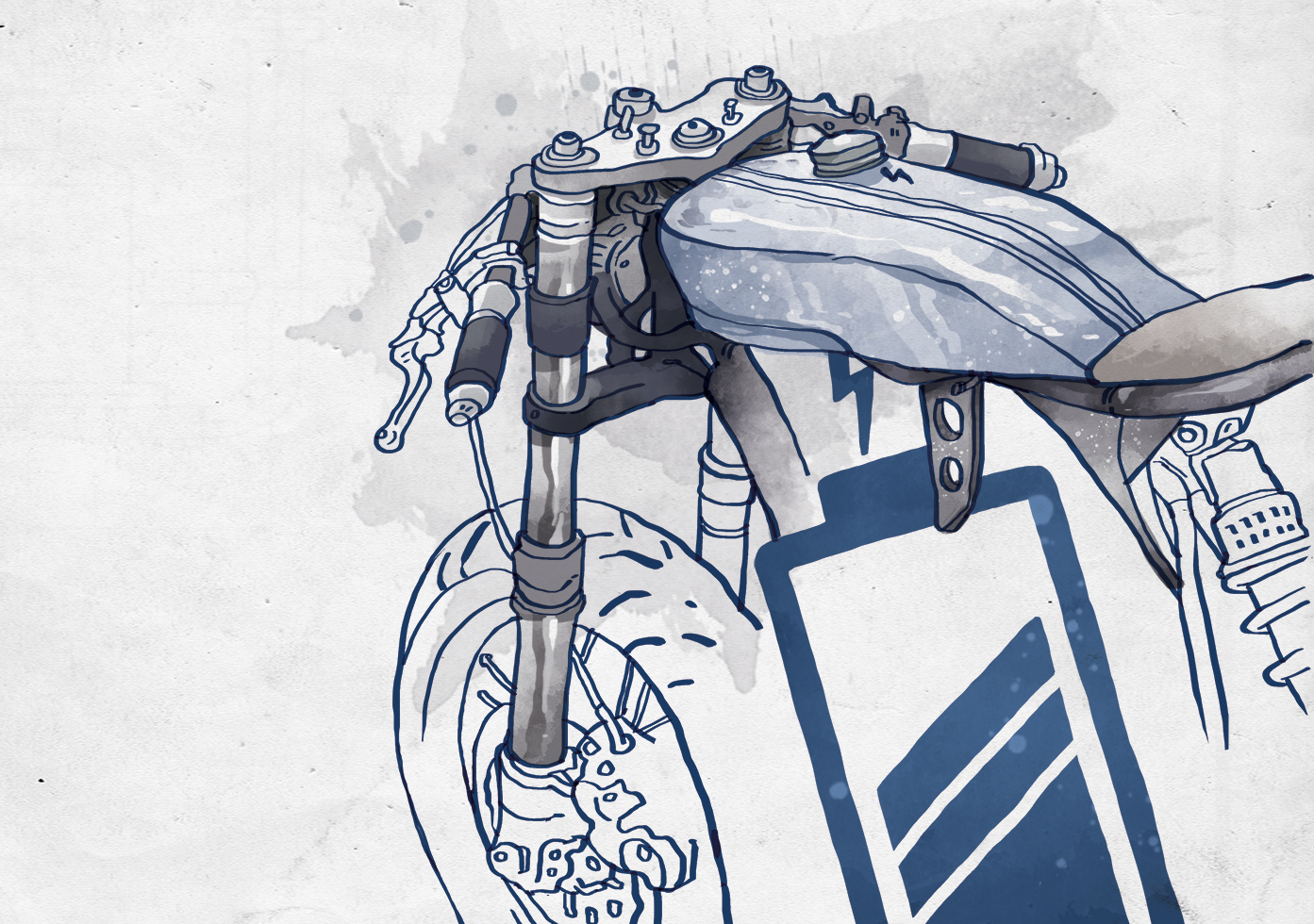 It seems like not so long ago that the purists among us were mourning the slow death of carburetors, and now we’re on the cusp of going gas-less; hell, gear-less, even. In April this year, the Singapore government gave the green light for high-powered electric motorcycles to be allowed on the nation’s roads and highways. A tiered licensing and road tax structure have also been announced, with Class 2B, 2A and 2 licenses being pegged to electric models producing up to 15 kW, 25 kW and greater than 25 kW respectively. The Garden City is readying its motorcyclists to embrace green technology – but where are all the electric motorcycles?

Before we get to that, let’s take a step back to marvel at the insidious creep of technological progress. You might think that electric motorcycles were a result of the motorcycle industry having an existential crisis at the turn of the millennium, but in truth, the idea has been around since the late 1860s. Electrification simply became eclipsed by the development of internal combustion engines, that’s all. The 1990s saw an explosion in battery advancements, and come 2010, an electric motorcycle named ElectroCat shattered records at the notorious Pikes Peak International Hill Climb. Electric motorcycles and scooters have now been available to commuters since 2006, with no less than 26 established motorcycling brands and start-ups currently falling over themselves to unleash the latest in battery technology. Among these brands: Harley-Davidson, BMW, Vespa and the Japanese Big Four, as well as Zero Motorcycles, Energica, Lightning and Gogoro, which specialise purely in EVs (electric vehicles).

Today, the electric rebirth continues to gather momentum. The International Energy Agency predicts that in 2025, there will be 12 million EVs sold worldwide.

Still, the electric motorcycle landscape of Singapore remains at a nascent stage in comparison to Europe, the US and even Taiwan. There are just 2 electric motorcycles registered on the roads here, out of a motorcycle population totalling over 140,000, reported Channel News Asia in March this 2020.

Why electric motorcycles would be great for Singapore

Going electric makes a whole lot of sense on our little red dot though. Here’s why.

Unless you’re a delivery rider, your daily urban commute is unlikely to rake up more than 100km of mileage, for which many electric motorcycles have the range for.

2) We have a very stable power grid.

One of the most reliable in the world, actually, with a 75% oversupply. No worries about running out of juice!

3) Silent, emission-free electric engines are a boon for built-up areas.

Less pollution makes for a happier commute, and happier neighbours.

Why electric motorcycles could be great for you

Aside from having the weight of urban pollution unburdened from your fragile biker conscience, going electric also offers substantial perks to motorcycle owners. Here’s why you might want to own an electric motorcycle – or two.

With most electric-powered motorcycles, arriving at peak torque is as simple as flicking a switch. Models like the Harley-Davidson LiveWire and Energica Ego can go from 0 to 100 kmh in 3 seconds flat.

Gas filters, oil filters, air filters, engine lubricants, coolant, spark plugs, clutch plates – these are just some of the things you’ll never have to change again on an electric motorcycle. Forget the valve adjustments too; it really is as simple as electric motor-> belt -> wheel.

3) Massive savings on gas and maintenance

How much would it cost to ride 100 km on electricity, versus petrol? The Harley-Davidson LiveWire puts out 105 hp and 235 km of range from a 15.5 kWh battery. A full juice up at a Shell Recharge station, which offers a rate of 0.55 SGD per kWh, would cost you 8.35 SGD. That works out to be 3.63 SGD for 100km. The Honda Africa Twin puts out a similar 100 hp, but at a fuel consumption rate of about 21 km per litre. Assuming an average pump price of 2 SGD per litre, it’d cost you 9.52 SGD to cover 100 km on that Honda. There you have it – you would pay roughly only a third the cost of fuelling up, if you made the switch to electric.

Also in the electric future, you’ll modify, customise and update your motorcycle with a mobile app. Your maintenance bill would be pared down to wear-and-tear parts like tyres, brake pads and steering bearings.

It bears noting that all those cost savings might not make up for the initial investment cost, since high performance electric motorcycles are still going at a premium price tag.

No vibration, no exhaust burns, and no need to clutch and shift gears – so you can concentrate purely on the ride. But this one could go both ways. Without the sound, the shakes and the grease, purists would say that the authenticity of the riding experience is dead. For those who simply can’t do without, electric motorcycle brands like Tactica preserve the manual gearbox.

Why electric motorcycles aren’t happening (yet) in Singapore

What’s standing in the way of the green revolution for motorcyclists in Singapore? Why haven’t local dealers brought in electric models for sale? It boils down to price, technology, and the simple fact that any vehicle is only as good as the infrastructure to support it.

Electric motorcycles are pricier than their gas-powered equivalents, and the government has yet to unveil incentives for early adopters. Current technology is still reliant on lithium ion batteries – the single most expensive component of an electric motorcycle. For instance, the Harley-Davidson LiveWire is likely to be priced in the same range as a Harley CVO Tourer, which could easily cost over 70,000 SGD in Singapore. On this, we’ll have to look to the year 2022, which is when global auditing firm Deloitte estimates that the cost of owning an EV will match the cost of owning its internal combustion engine equivalent. Affordability could well mark the tipping point for electrification.

How far will it go and how long does it take to juice up? That’s what people would ask about any electric motorcycle, and you might not like the answer. Most electric motorcycles that are currently in production offer a range of 240 km or less in single charge, with some covering only 80 km before flat-lining. We can live with that in our small island-city, but it’ll definitely limit touring abilities across the border. What’s more, the shortest charging times using dedicated quick-chargers are usually 20 to 45min, which is how long you’d have to spend shaking your leg at a charge-point – which may or may not have a queue, or good coffee for sale. A full charge takes 6 to 8 hours on average.

While e-motorcycle manufacturers scramble to improve travel range in between charge-ups, Singapore is still far from being able to offer a dense national charging network to ease range anxiety. There are presently 1,600 public charging points in the country, which may sound like plenty until you consider the long charge times and overnight use. The government has set a bold target of boosting it to 28,000 points across workplaces, residences and general public areas by 2040, but in the meantime it might have to come down to innovative solutions from the private sector, such as the subscription-based battery swapping stations offered by Gogoro scooters in Taiwan.

Fact is, new technology seldom rewards early adopters. Electric motorcycles haven’t been around long enough to forge consumer trust, and dealers balk at the risk of bringing in expensive products with uncertain demand. The low servicing requirements of electric motorcycles also present a threat to the traditional revenue model of dealers, who must then find compensatory new income streams. The local motorcycle industry acknowledges that electric is the inevitable future, but players are wary of investing too boldly, too soon.

Which of the established dealerships here will have the guts and gumption to pioneer mass market electric motorcycle offerings in Singapore? Will it be a new business upstart that sparks the revolution? Or will the government lead the way through fleet purchases for LTA and the Traffic Police? If Singapore is hoping to keep pace with the green global cities of tomorrow, we shouldn’t have to wait too long to find out.