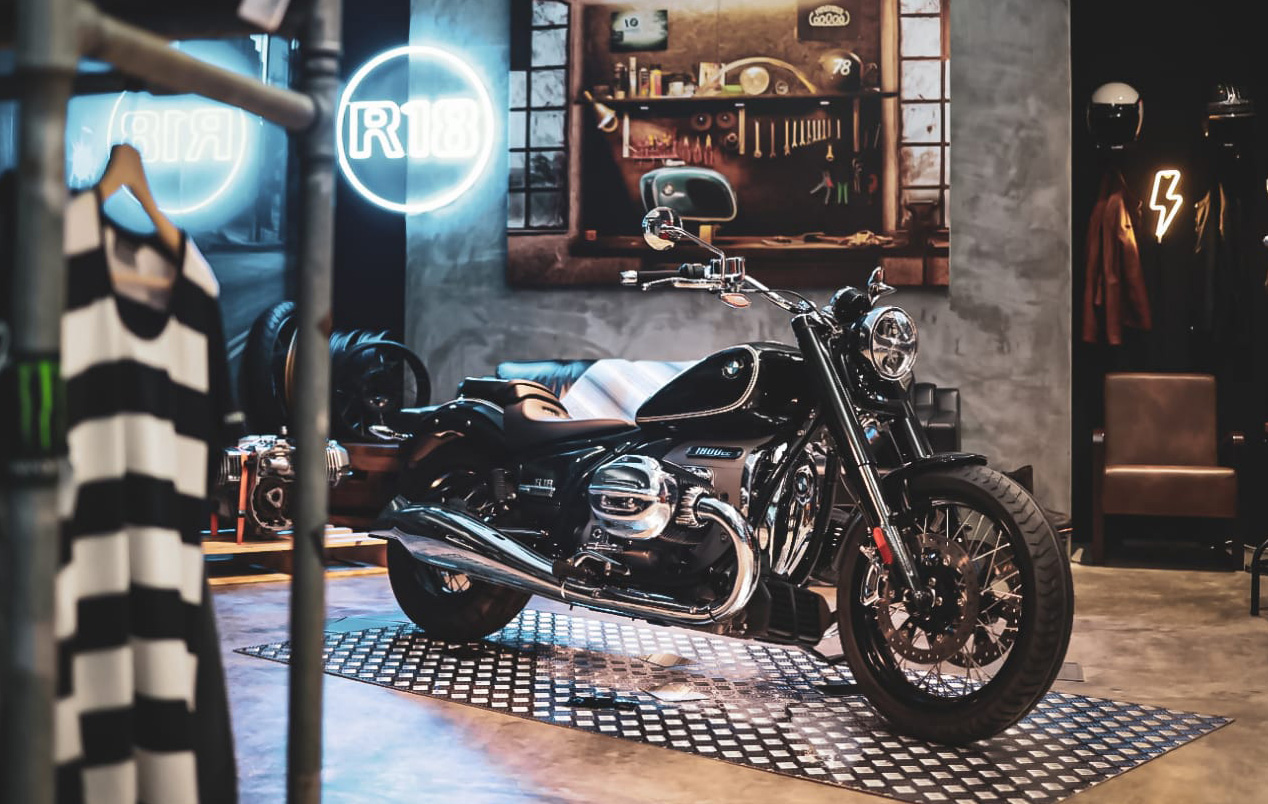 BMW wants you to know that age matters. They’ve dug deep into the history books to roll out their biggest boxer engine to-date in a nostalgic cruiser silhouette that takes aim at its Harley competition with all the weight and subtlety of WWI trench artillery.

From afar, BMW’s cruiser is an ocean liner. With a saddle. Which shakes sideways as boxer engines do. It’s hauling a wheelbase of 1,731mm, which is just about a thumb longer than a Honda Gold Wing.

If you can look past the R18’s whopping length and shuddering mass, it’s actually a beauty to behold up close. Clean lines, no errant wires, immaculate finishing and a visage of timeless black-and-chrome, this motorcycle is an architectural study in noir elegance. It may be a polarising piece of art (especially with an exhaust pipe that looks like a mermaid’s chastity belt), but one thing’s for sure – nobody with any crumb of dignity would wear sandals and shorts to throw their leg over this ride.

Yes, BMW is going for the lifestyle appeal on this one. Known for their adventure models tricked out with tech and electronics, they’ve bucked Bavarian tradition to produce a cruiser that favours style ahead of fancy gadgetry. The R18 wants to stir emotions with a hardtail look, telescopic forks, spoked wheels, a speedo that’s mostly analog, and raw vibrations that are untamed by any counterbalancer. It will also court your vanity dollars with plenty of custom accessory parts from Roland Sands Design, Vance & Hines and Mustang Seats.

Still, retro lovers will not have to suffer for the sake of authenticity. The R18 boasts modern rider aids like ABS, 3 electronic ride modes, an anti-slip feature to prevent rear wheel hop, a neat reverse gear and profoundly cool LED lighting technology with an integrated tail light.

We must point out that cruiser fans might find the ergonomics a deal-breaker. The boxer engine that commands centre stage on the R18 crowds the rider out below the knee, and makes forward controls impossible. In fact, if you’re a shoe size 44 or larger, gear shifting under that boxer overhang would have to be a very precise move.

Also, for the love of rock-n-roll, could someone please do something about that stock exhaust sound? The engine starting up is music to our ears, but we’ve heard industrial vacuum cleaners that are more exciting than that Euro 5-compliant pipe song.

Honestly, whether the Harley camp should be losing any sleep over the R18 is far too early to say. While the R18 does set out to compete with the Motor Company’s Softail line, it still costs a pretty penny more than a Harley-Davidson Street Bob (34,999 SGD machine). Also, the R18 strikes us as a classy dame that makes no pretence at the bad boy rowdiness of iconic Harley muscle like the Fat Boy, Low Rider S, or Softail Slim. We think it’s a slightly different sort of aficionado in Singapore that’s got an appetite for this Bavarian newcomer – at least 4 have already put the cash to the throttle on this, we hear.

Visit the BMW Motorrad showroom and meet the R18 in the flesh; let us know what you think!

Technical specs of the R18 can be viewed here.