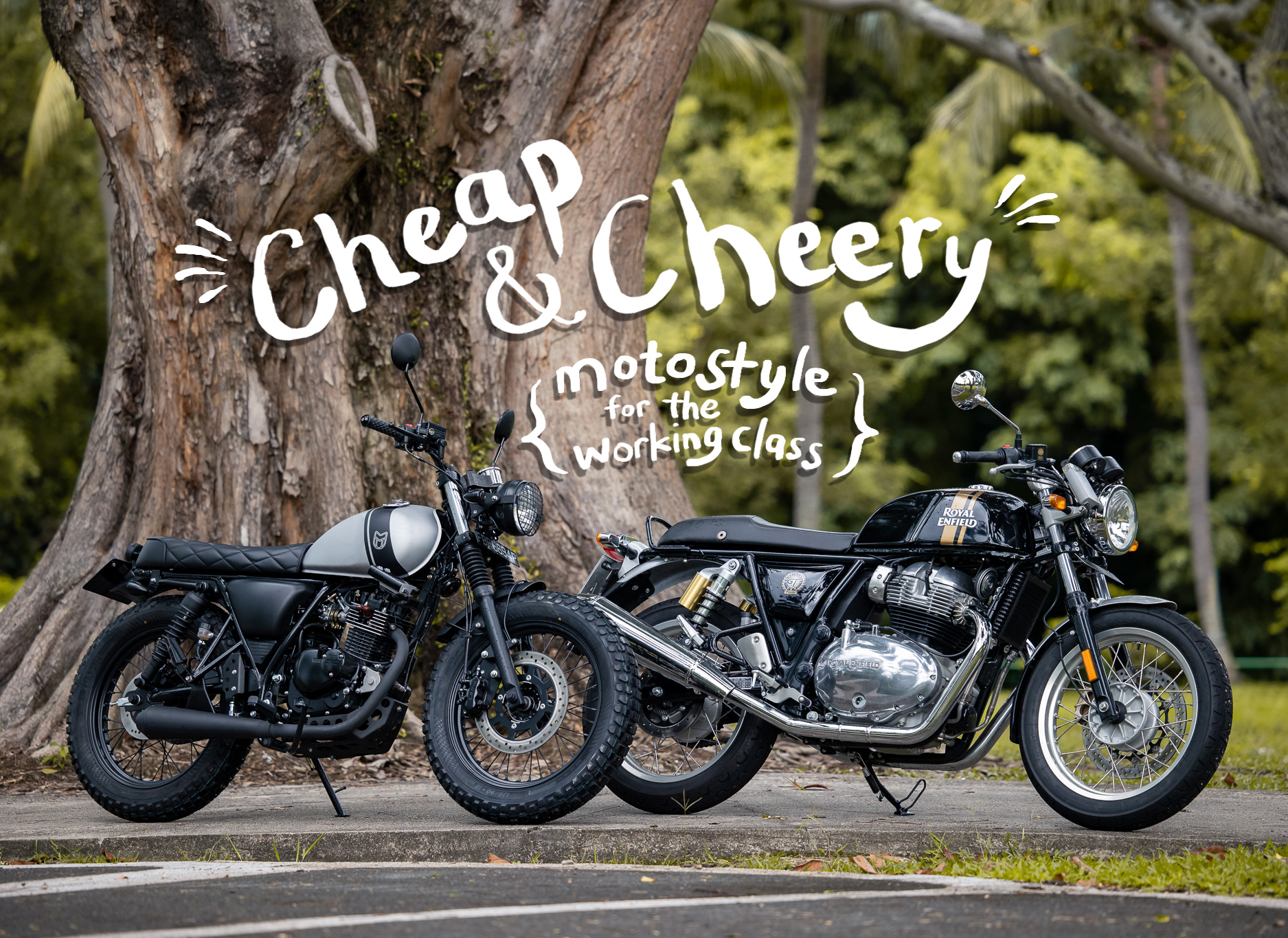 My friend Deryne is in want of a motorcycle. She is a “penniless” student of law and fearless Pink Dot activist who knows her way around a good craft beer, and can pull off serious pencil suits as well as strategically planted tattoos with equal aplomb. She has a Class 2A license and isn’t afraid to use it. Her motorcycle needn’t be flashy, fast nor powerful, but it better not put a dent in her street cred nor bank account.

While many of us are obsessed with the latest and greatest spec sheet shootouts, the Derynes of the world remind us that simple and stress-free motorcycling is still sellable. As long as the bikes look good, of course.

Here in Singapore, two marques are building their house entirely on the premise of attainability. For anyone who’s ever said, “Find me a bike that’s cheap and cheery!”, these are the first two places you’ve got to look. So Deryne, don’t say we never jio ah.

If you’ve never heard of Mutt Motorcycles, that’s because they’re fresh off the boat to our shores. They set up shop earlier this year in the hipster enclave of Joo Chiat, turning out small cc retro Britbikes with fully legal custom looks and very agreeable price tags.

Enticed by an Instagrammable interior, fashionable merch and friendly angmoh store owners, people tend to come in for curiosity, stay as a patron, and return as a friend. Customer care is paramount to the Mutt experience, and new owners are automatically welcomed into a non-intimidating community that connects over Whatsapp and regular ride-outs.

It’s a formula that works. Since February 2020, Mutt has already put 60 of the cavalry on the road. Their trendsetting owners are mostly in their late twenties to early forties, with nearly a third being female. Many hold a freshly minted Class 2B license, while others are experienced riders who’ve adopted a Mutt as a fun, no-stress side bike.

The “I want one” handsomeness of a Mutt is hard to deny. Looks-wise, Mutts are like starter Bonnevilles for those who haven’t the license nor depth of pocket to own a Triumph. Their working bits are based on reliable, economical, air-cooled single-cylinder Suzuki GN engines, while the pretty parts are designed in Birmingham, UK, before everything gets put together here in Singapore. Each Mutt is fuel-injected and Euro 4 compliant, and comes in 125cc and 250cc versions.

Our Mutt initiation takes off with the RS-13 125. From the handcrafted raw steel tank to diamond-stitched saddle, black grilled headlights and beefy knobby tyres, there’s no unphotogenic angle to this boy.

It’s also a damn easy ride. There’s only about 105kg of bike to push around, and the upright seating posture plus low engine heat are forgiving in urban traffic snarls. And talk about bark over bite – the Mutt lets out a most pleasingly visceral exhaust growl.

Because the bike commands a big presence, it’s easy to forget that it’s about as powerful as a pencil sharpener. 12hp does necessitate a little more flogging of the throttle than we’re used to, and even then it gets breathless on the highway, simply lacking the grunt to push past larger vehicles safely. It takes a little while to work itself into a wheezy top speed of 112kmh. But to be fair, these would be the same complaints for many popular 125cc models in general. Pocket-sized Honda cult favourites, the Super Cub and Grom, also weigh in at just over 100kg and offer about 10hp. I’ve ridden the Super Cub. A flung cabbage would give more acceleration.

If you’re not in a hurry, much can be achieved with little power. I say this as one who has once tortured a 125cc for over 14 hours and 900km from Singapore to Thailand. If your bike looks this good, slow is better.

Just don’t be expecting all the bells and whistles, seeing as how affordability is part of the Mutt’s charm. Gear shifting and braking are just decent, and the suspension can feel a little unrefined. There’s pretty much nothing in the way of electronics or rider aids.

You can put a 125cc Mutt on the road for 15,999 SGD, or a 250cc for 17,999 SGD. This includes a current COE of 7,300 SGD, a 2-year warranty on parts and labour, breakdown support and loaded cash card. In-house financing options are also available for those who prefer to break it down into monthly bills.

In not so many words, a Mutt is as simple as a hardboiled egg, and cooler than a penguin’s dick. It’s newbie-friendly as hell, and won’t break the bank. For riders in Singapore looking to enter the lifestyle motorcycling scene, it’s a welcome addition to the menu of palate-friendly starters.

Next up in our Cheap & Cheery finds – where can you get a good lookin’ Class 2 bike for just about 10,000 SGD (machine price)? We look to one of the world’s oldest motorcycle marques, which has just put up a stylish new showroom in Singapore. Click here to read about our romp with Royal Enfield.

Connect with us
View Comments (5)