Lessons on how not to die on the road

You can consider Meng Lee somewhat of a lifestyle bike aficionado, having spent considerable time behind the bars of Ducatis, BMWs and Harleys. This is his take on the BMW R18, the Bavarian marque’s largest ever engine, housed in a glamorously retro cruiser silhouette. You can read about our first impressions of the R18 when it was launched in Singapore, here.

I’ve enjoyed the BMW R nineT scrambler and I currently own a Harley-Davidson Road King Special. The BMW R18 seemed like it could be an interesting hybrid of both those engines, and in many ways it really is. Now, this is not a sponsored article and you’re about to hear my honest opinions. I won’t delve into spec sheet comparisons, but will instead share how I feel about the bike after a weekend’s ride. After all, the R18 is about stirring the emotions.

Those familiar with the BMW R nineT will surely wonder about how the R18 measures up with its similar air-cooled boxer engine. On the R nineT, I enjoyed the power and sweet-sounding rumble, and the air-cooled boxer doesn’t get too hot even in heavy city traffic. My good friend Ian Marks would say it’s ‘like a refrigerator’.

The only complaint I had with the R nineT engine was its sideways knocking during throttle blips at neutral, and during down-shifting of the gears. It shakes the bike abruptly towards the right. Now, that was on a 1200cc engine. With the 1800cc R18 engine with a longer stroke and new push rods, the effect is amplified. This time, it even rocks to either side. If this was an intentional design decision for the sake of imparting old-school character, BMW might have overcooked it.

Some newcomers to the R18 might be put off by the sideways knocking, especially those who have never experienced an air-cooled opposed twin engine before. However, I strongly recommend spending a longer time in its saddle, because by the second day I found myself accustomed to the engine behavior and truly starting to enjoy the bike.

You will notice the R18’s 345 kilos when lifting it off the side stand, but once those wheels get rolling, it becomes surprisingly smooth and nimble. That is no doubt owed to the low centre of gravity, wide handle bars and mid-controls footing.

Suspension systems on the R18 felt very plush and confidence-inspiring. The bike corners with ease, but quickly runs out of lean angle due to the wide and low foot pegs. There’s no shortage of braking power, requiring little effort to stop this heavyweight.

Versus an American Big Twin

Ultimately, the BMW R18 is a cruiser, and it cannot be spared a comparison against an American V-Twin.

The Harley’s Milwaukee Eight engine scores one, simply because it doesn’t rock the rider sideways like the R18.

But then the R18 fares better in terms of rear road grip – somehow I’ve always found Harleys to be twitchy in the rear. The suspension on the R18 is also more plush, and its neutral riding posture makes it a more comfortable ride in the long haul. For these reasons, I would pick the R18 over my Road King for a trip up north.

But on regular days in the city, man, my Road King gets so much attention. So, does the R18 turn heads?  Yes it does, but only when people take a closer look, because they certainly will not hear it go past. Why? Because the R18 is Euro 5 spec’ed; no further explanation needed.

In terms of engine smoothness and power delivery, both the Harley’s Milwaukee 8 and the R18’s air-cooled boxer are on par.

The R18 will have you running the ‘Earth, Wind & Fire’ playlist in your mind as you roll down the highway, rather than headbanging to AC/DC or Metallica.

It’s more of a cruise down Miami Beach, instead of a wild Hot Rod rodeo with bloodied knuckles on the steering wheel.

I think this is largely due to the absence of rumble (see my point about Euro 5 above). The R18 is a laidback ride that will certainly put a smile on your face while pulling those long kilometers, and I think that is the ultimate goal of riding a cruiser.

Would I own one?

I have learnt to never say ‘never’ because your riding needs, inspirations, and bank account change over time. You see, I used to say, “I’ll never own a Harley or a sports bike.”

I get the whole retro cruiser design inspiration behind the R18, but its price tag and stiff competition from existing cruisers in the market might make it a challenging sell.

What the R18 has going for it is an exciting potential for customisation, and with new parts and accessories becoming available soon, we could see more wallets opening its way in Singapore.

Technical specs of the R18 can be viewed here. 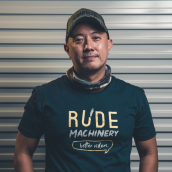 Meng is a Professional Photographer, and Director. He is not a fan of writing because a picture speaks a thousand words, no?