The first thought that comes to mind when we think about motor racing is Valentino Rossi leaning at unimaginable angles or motocross rider taking a 60-foot jump across a wide gap.

Enduro is a lesser-known version of motorsport that is quickly growing into motorsport culture all over the world. Enduro riding is a patchwork of trail riding, mountain biking, weight training and bushwalking. While it is a test of endurance and skills, the pace rarely ever gets quicker than a trail run.

Although it is an individual sport, Enduro is much safer and a lot more fun when you ride with a group of friends. The spills and drops are usually just occasions to dust off, laugh about and recount endlessly over social media.

The Seri Alam Offroad Challenge 2022 was very well subscribed. Being the first such event in Southern Malaysia after the pandemic, several riders from all over Malaysia and Singapore turned up at the event. The event also served as an effective warm-up for the upcoming Rimba Raid 2022 which will take place in Kuala Tahan in just a few weeks.

The organizers did a fantastic job hosting the race in a breathtakingly beautiful part of Malaysia. The plantations and the adjacent forest offered a perfect blend of flat-out racing and hill climbing that is the staple of Enduro.

The river crossing right at the start was cleverly designed to create a gap between the best riders and the rest. Steady rain over the past few weeks leading up to the event made the riverbanks slick. But truth be told, the red mist of racing made this obstacle more difficult than it should have been for most racers.

The rest of the course ran through very muddy plantation trails with very defined and deep ruts at spots and several very slippery Enduro style climbs. It is difficult to comprehend the severity of a slope looking at pictures. This picture below although grainy and small, is a good example of a typical Enduro climb. Imagine about 6 of these strewn out along the course and about two dozen other slopes of lesser intensity interspersed in between. That is what an average Enduro course feels like.

Just for good measure, all races started Le Mans style. Riders had to run 15-20 yards to their bike before starting them and riding off.

Class A riders got the day started. This big bike group (1000cc and above) was primarily made up of Africa Twins and KTM 1090s. You could see the riders adored their machines – after all most of these machines are a few years old now and have become part of families and folklore. Some riders justifiably did not even bother to fit knobby tyres for a one-off race. While the early finishers in the race posted outstanding times, their bikes were fully equipped racegoing machines.

Class B and C riders, grouped together as DP Rally, were up next. This was an odd group with modern mid-range superhits like KTM 790s, Yamaha Tenere T7s, BMW 800GS and KTM 350s mixed with classic single cylinder thumpers like XR400s. If you were looking to have an easier day of racing, riding a modern 350 in Class C would have been the best choice. But then again, Enduro racing is about negotiating demanding trails and getting through them. Easy gets boring quickly.

The Cub Cross and CKD classes were a complete spectacle. The fun and satisfaction the owners had when they conceptualized and built their rides on everyday roadgoing frames was evident as they paraded their mounts like prized thoroughbreds. Long travel and deep credit be damned when you could just ride whatever you’ve imagined in your own mind and still have a rollicking fun time.

Enduro racing has a small group of dedicated ladies. They have better techniques, bigger hearts and finer balance than most men. Watching them finish the course with smiling faces and speaking of lines they took and mountains they climbed made us feel like we rode alongside them. Here’s to more women in Enduro. In any sport. And in life.

The Veteran and Novice classes had a lot of entries. Forties is the new thirties never rang truer. The lineup had some very fit and very accomplished racers. Some of the finishing times were barely believable. The camaraderie in the group was palpable. Riders helped each other and looked out for others in the pack like true champions always do. No one was left behind.

While there were some impressive results and outstanding accomplishments, Enduro riding and racing is about having fun with friends, doing something challenging and being close to nature. It is not just a cliche, but everyone was a winner just for showing up and reiterating their commitment to the sport. And most of the racers had a great outing this August Sunday and that is what matters.

The Open Enduro class is usually the most challenging race of an enduro event. The organizers set up a challenging course throwing everything Seri Alam had in its repertoire to give the real expert enduro riders a chance to test out their skills. Short cut off times did take some fun out of the race for a lot of riders. Something for the organizers to note.

Enduro riding involves endurance and skill and as such a good enduro event should test both attributes. The race itself was on the shorter side – more like the sprint version of the Ironman triathlon. For the next edition, organizers could consider running the event over 2 days to give the participants more time to complete their races and test more of the skills involved in Enduro. This also allows racers who are stronger in some areas and weaker in others to pinpoint their weaknesses and go to work on them.

In the end, to do well in a race like the Seri Alam Challenge that has an easy early section and difficult, slow climbing at the very end is to try and get to the difficult sections as far ahead of the rest of the field as you can. To do that, you have to race hard right from the beginning. Don’t be shy, be like the good old Australian expression and go ‘flat out like a lizard drinking’. 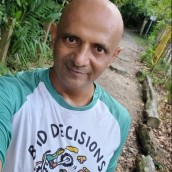 Vinod describes his strongest skill as the ability to learn. He revels in being a perpetual beginner in everything he does and in understanding things deeply. He believes equal parts in the law of averages and in being in the present. While on the motorcycle, he leaves testing lean angles and top speeds to his immensely more talented ride buddies.